We say "Yes" to this

The Safe Sanctuaries program in the United Methodist Church has reached a status close to that of being a "sacred cow" -- there are UM Conferences which are now going the second time around on this, again with mandatory attendance required of all active pastors -- W. Pa Conference is one scheduled for a "second run" -- first time was in 2000.

And having attained the "sacred cow" status, it is strongly assumed that no person should ever question why there is such an emphasis while neglecting an equally strong emphasis of the need of "safe sanctuaries" in other locations beyond church walls. United Methodists who, after reading the nature of the present "problem," feel that there is an urgent demand for more consistency when we stress the need for "safe sanctuaries" in the UMC are requested to share this address with other United Methodists: www.crrange.com/comment63.html

The Safe Sanctuaries program was launched in the United Methodist Church a few years ago.

It mainly came about as a result of the efforts of Joy Thornburg Melton who is a combination clergyperson and lawyer. One of her specialties among others has been dealing with child abuse situations as she pursues her practice of law in Atlanta GA.

Over time she developed materials which heightened awareness of the threat of the abuse of children and youth within church sanctuaries. And so it happened that she began to hold seminars in different conferences of the United Methodist Church. One of these was the Western Pennsylvania Conference in which I am an ordained elder.

Attendance at the seminars was mandatory for pastors. Detailed information was given to each as to what must be done to insure that his/her church would be a "safe sanctuary." With physical changes as needed made to the church and background checks and clearances on all staff members and volunteer workers (such as Sunday School teachers, youth workers, and Vacation Bible School workers), then it was assumed that the church would be a "safe sanctuary" free from the possible threat of abuse to children and youth.

Rare, if ever, would be the person who would dispute the effort to make our churches secure and free from any potential threat of harm being done to our children and youth. The devastating revelations of sexual abuse which have taken place within Roman Catholicism certainly underscores the critical nature of this issue.

Joy's materials and the resulting seminars have received an outpouring of accolades throughout the United Methodist Church in recent years. And as a lawyer personally involved in child abuse situations she is able to speak with a measure of authority when it comes to addressing the subject. Other church groups beyond the United Methodist Church are also pursuing the issue and seeking to establish their churches as guaranteed "safe sanctuaries" for our children and youth.

But as we in the W. PA Conference sat in on Joy's seminar that day a few years back, a troubling thought came to me.

The United Methodist Church took the "Safe Sanctuaries" ball and really ran full speed ahead with it -- pedal to the metal and all the energy and effort required to push this into every church everywhere! And as was previously mentioned, this was considered so high a priority that mandatory attendance was required of every pastor and in months following extensive reports were to be made as to how "safe sanctuary" standards had been implemented.

Oh yes -- about that troubling thought -- I was moved to question why the United Methodist Church in all this emphasis had drawn a boundary line at the entrance to the human womb! At best we have a glaring inconsistency and at worst, hypocrisy of the first magnitude!

Most people when giving serious thought to the matter would agree that the human womb in its own right is a very special sanctuary. Under normal conditions the womb is a quiet and very peaceful environment. Primarily it is special because of what is happening there -- Almighty God, our Creator, claims that He is personally involved in the formation of a human being!

You think not? Then what do you make of His statement, "Before I formed you in the womb I knew you; before you were born I sanctified you; and I ordained you a prophet to the nations." Uh, He said that to a fellow by the name of Jeremiah (Jeremiah 1:5) -- He could just as easily said the first part to you or me, with details about what He had in mind for us possibly varying a bit from what He told Jeremiah!

Of course we have options with such a statement when it comes to the issue of the unborn residing for a time in their own special "sanctuary." We can:

claim God never made such a statement in the first place -- someone has attempted to put words in God's mouth which He never uttered.

claim the Scriptures are merely the opinions of humans -- as such we can act as prosecutor, judge, jury, and executioner when it comes to dealing with those Scriptures -- it doesn't really matter, since the final word rests with us!

claim that all that is happening in the human womb is merely a biological process resulting from the joining together of a male sperm cell and a female egg cell -- usually this approach is taken when "science" has become our "god!"

OR we can accept the unchanging truth revealed by God that every conceived human is known and identified before conception and birth and there is a place for that person in God's plan for His creation! (Psalm 139).

As you may be aware, the human womb is not always a safe sanctuary in the "land of the free and the home of the brave" -- about 100,000 times a month that sanctuary where an unborn child is in the process of developing is violently invaded and the child brutally mutilated and murdered! 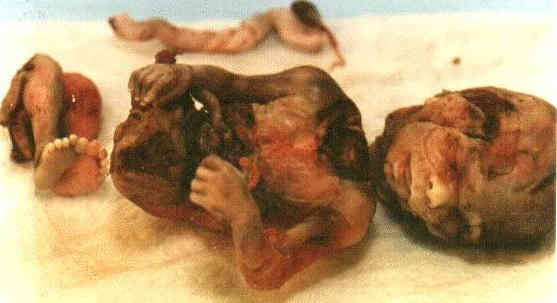 Would you agree that this little one's mother's womb turned
out to be something quite different than a "safe sanctuary?"

The United Methodist Church has placed its "seal of approval" on the destruction of unborn children. There is a vain attempt to be pious in discussing the subject but after the final sentence has been written in the Social Principles, any woman can get an abortion with UMC approval if she wants one -- all that is necessary is for her to claim that the pregnancy will bring about undue stress, hardship, psychological damage, social lifestyle hindrances, financial strain, unsightly stretch marks on the abdomen, deprivation of sleep at 2 AM, inability to sleep in until 11 AM each day, or whatever!

So I wrote to Joy Thornburg Melton about this matter, suggesting that the United Methodist Church should expand the boundaries and definition of what we mean by the term "safe sanctuaries" so that we include unborn children along with those who are already born, and are doing everything possible to insure that the human womb also becomes a "safe sanctuary" free from intrusion and an act of the most violent kind being done to the occupant peacefully residing there resulting in his or her death!

As expected, I received no response from Ms. Melton. Maybe she is pondering a bit on the possibility that the human womb is a "sanctuary" of far greater significance than any church building will ever be!

So the message of the United Methodist Church regarding "safe sanctuaries" continues -- "Every church should be a safe sanctuary where children and youth are free from the threat of any kind of abuse -- BUT our view of 'safe sanctuary' does not in any way apply to the human womb and the person dwelling there for a few months!"

Declarations and pronouncements coming out the United Methodist Church are quite numerous in quantity as various issues are addressed time after time.

But you will never hear so much as a feeble whisper of protest over the fact that the "safe sanctuary" of the human womb has been violently invaded and its inhabitant brutally destroyed at the rate of 100,000 per month in a nation that has "In God We Trust" inscribed on coins and currency!

Leadership in the United Methodist Church has yet to wake up to a very bitter reality as the "safe sanctuary" program for churches is stressed but at same time is unwilling to stress the need to insure that the human womb must always be a "safe sanctuary" as well.

Of the nearly 45 million victims (as of this writing) destroyed in their mothers' wombs over the years, if they had been permitted to live, there would have been a number who would have become members of the United Methodist Church and would have contributed to its ministry in use of time, abilities, and material resources.

In one sense perhaps our membership losses year by year are well deserved since we have been very selective in our choice of determining and defining what a "safe sanctuary" ought to be!


Watch this for 60 to 90 seconds
and see what happens!

O LORD, how long shall I cry, and You will not hear? even cry out to You, "Violence!" And You will not save. Why do You show me iniquity, and cause me to see trouble? For plundering and violence are before me; there is strife, and contention arises. Therefore the law is powerless, and justice never goes forth. For the wicked surround the righteous; therefore perverse judgment proceeds.


Return to or Sneak a Peek at C. D. Harriger's BLOG at
Musings of a Maverick!

Circuit Rider's Range (Main Area)
Ramblings from the Pen of a Maverick...
CR's Leap of Faith! OR The Whole Spread of CR's Range!
Return to Building Walls with Untempered OR Tempered Mortar!
Bird's Eye View of CR's Range
What's New At CR's Range?


How to Become A Christian

For comments, complaints, or just plain axe-grinding, contact C. D. Harriger by clicking on Penelope, efficient mail hostess of Circuit Rider's Range, and she will set up the email form for you to fill out and send on its way

The poster above is